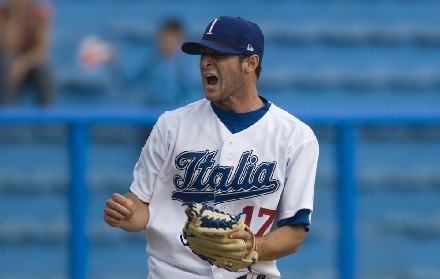 Alessandro Maestri is a living legend at home where he is synonymous with Italian baseball.

When the Federazione Italiana Baseball Softball (FIBS) launched its world famous academy in the beautiful coastal community of Tirrenia nearly 15 years ago, Alessandro Maestri was one of the first five pitchers to walk through the doors. Having played in four continents during his globetrotting career, the 31-year-old right-hander was the first Italian-born-and-developed pitcher signed by Major League Baseball in 2006.

FIBS Academy director and former Chicago Cubs scout Bill Holmberg knew early on that Alessandro was something special when he saw the young Italian pitch for the first time and later signed him to a Minor League contract.

“When you think of talent in Italy, you think of Alessandro Maestri and Alex Liddi,“ said Piazza, who has been awarded by FIBS as Ambassador of Italian Baseball. Maestri came back to pitch for Team Italy in the 2007 European Championship in Barcelona, Spain. In the 2007 IBAF Baseball World Cup in Taiwan, Maestri was the Azzurri closer against Team USA. He made history when picking up the save to beat the Americans for the first time in 21 years of competition.

In the 2009 WBC, Maestri’s pitching was once again dominant as he held opponents Canada and Venezuela scoreless in 2.2 innings of relief. As a starting pitcher for Team Italy in the 2013 WBC, Maestri enjoyed much success. After Team Italy scored an upset over Mexico in the WBC opener, Alessandro faced Canada in game two. Maestri allowed just one run on three hits with three strikeouts in 3.1 innings and earned the win for Team Italy. In the second round of competition against Puerto Rico, Azzurri manager Marco Mazzieri summoned his reliable ace Alessandro Maestri, who pitched 4.1 scoreless innings against the eventual WBC runner up.

In 2010, was again Alex on the mound, to get the final out and the bronze medal at the Intercontinental Cup, against host team China Taipei.

Bill Holmberg, the man responsible for landing Maestri an MLB contract over a decade ago, knows the Italian pitcher can get the job done against the game’s elite in the 2017 WBC. Holmberg is confident that Maestri has all the tools necessary to lead Team Italy in his fourth consecutive WBC appearance. Holmberg said, “Alessandro can do whatever he wants to. He’s got the temperament and composure. He’s hit 95 mph, and his slider is at 86 or 87. He competes as hard as anyone out there.”

As a starter and relief pitcher in the Chicago Cubs Minor League system for five seasons, Maestri racked up a 24-17 record with a 3.75 ERA and 19 saves. A two-time Minor League All-Star, Alessandro put away hitters with his evasive slider–which was once voted as the best slider thrown by anyone in the entire Cubs organization. Maestri put his skills to the test on April 1, 2009, when he finally had the opportunity to pitch at the Big League level during a Cubs Spring Training game in Phoenix against the Oakland Athletics. Thinking that it was yet another day on the bench or perhaps a really good April Fools prank, Maestri was informed that he would making his first preseason Major League pitching debut. The setting was perfect under a pleasantly warm Arizona sun for Maestri to take over for Cubs starter Carlos Zambrano and Luis Vizcaino in the fifth inning. Little did Maestri know that he would come face-to-face with some of Major League Baseball’s most feared hitters. His first strikeout victim was Orlando Cabrera, who was caught looking at a fastball on the outside corner. Next up was slugger Jason Giambi, who managed to squeak out a single through the hole. Following was Matt Holliday, nicknamed ‘Big Daddy’ for his towering six-foot-four stature and his muscular physique. Maestri dug down deep and hypnotized the intimidating Major League All-Star with a called third strike slider for out number two. Finally, the selective Eric Chavez worked the count full before swinging and faltering to Maestri’s wicked slider in the dirt for his third strikeout. Upon returning to the dugout, legendary Cubs skipper Lou Piniella congratulated the young Italian hurler for a job well done.

Although Alessandro never made his MLB debut in a regular season game during his time with the Chicago Cubs, he found a home playing ball internationally. Maestri was recruited to pitch Down Under for the Brisbane Bandits during the 2011-12 Australian Baseball League (ABL) season. As the workhorse of the Brisbane Bandit pitching staff, Maestri led his team in wins (4) and proved to be one of the best pitchers in the league. He finished third in the ABL in innings pitched (63.2) and in strikeouts (53), fourth in the ABL in WHIP (1.16) and sixth in the ABL in ERA (3.25). In round eight of the regular season, he earned the ABL Pitcher of the Week award after pitching a stellar complete game two-hitter against the Canberra Cavalry and was later crowned with the prestigious ABL Fan Choice award.

Maestri returned to Italy to play briefly in 2012 for Rimini in the Italian Baseball League (IBL) before signing a contract to pitch for the Japanese Kagawa Olive Guyners in the Shikoku Island League. Maestri then moved up to play at Japan’s highest level for the Orix Buffaloes in the Nippon Professional Baseball League. During his four seasons with Orix, Maestri played 96 games with 14 wins, 11 losses and one save with a 3.44 ERA. Originally signed as a starting pitcher, Alessandro was moved to the Buffaloes bullpen in 2014. Maestri played for the 2016 Hanwha Eagles in the South Korea’s KBO League before retreating to Japan to join Gunma Diamond Pegasus of the Baseball Challenge League.

‘Patriarch’ Alessandro Maestri is the most seasoned of all Azzurri starting pitchers because he has played in all WBC tournaments since the competition began in 2006. Team Italy manager Marco Mazzieri undoubtedly will call on Maestri’s experience to lead the Azzurri in their battle against Mexico, Venezuela and Puerto Rico in WBC Pool D at Estadio de Beisbol Charros de Jalisco in Mexico beginning March 9, 2017. If anyone can keep MLB All-Stars off the bases, it’s Alessandro Maestri. The sky is the limit for Team Italy with its roster of talented players who are committed to winning. Proud Italian American Mike Piazza has high hopes for Team Italy. “Our dream one day is to have this team be a champion,” said Piazza. If Alessandro Maestri has his way, the time will come sooner later and Team Italy will advance to the second round of play in San Diego with sights of reaching the 2017 WBC finals at Dodger Stadium.