Pitcher promises he will be “active and aggressive” in games

The Korea Joong and daily article. 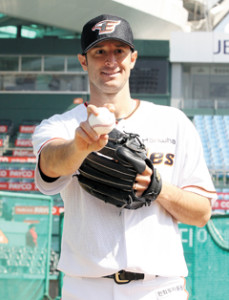 The Hanwha Eagles have finalized their roster for the upcoming season after signing Italian pitcher Alex Maestri (who joins the Hanwha on Tuesday).

Joining from the Orix Buffaloes of the Nippon Professional Baseball in Japan, Maestri inked a 50 million yen ($438,000) deal including incentives with the Eagles. Maestri requested his salary be paid in Japanese yen.

The 30-year-old pitcher was born in Cesena, Italy, and joined the Chicago Cubs in 2006 to become the first player out of Italy to join a Major League team. Maestri can throw a variety of balls including two-seam fastballs, sliders and changeups. His ball control is considered decent. Maestri pitched for Italy at the World Baseball Classic (WBC) in 2006, 2009 and 2013. He also made an appearance in World Baseball Softball Confederation (WBSC) Premier 12 in November 2015.

Maestri doesn’t have any actual playing experience in the Big League. But after playing in the minors for five season, Maestri recorded 24 wins, 17 losses, 19 saves and a 3.75 earned run average (ERA) in 191 games. Maestri began playing for the Orix in 2012, and over the following four seasons played 96 games with 14 wins, 11 losses and one save with a 3.44 ERA. Maestri began with the Orix as a starting pitcher but switched to relief pitcher in 2014. Last year, he played in 28 games with two losses and a 3.19 ERA.

Eagles manager Kim Sung-keun was having problems finding a foreign pitcher that met his standards until Maestri came along.

“I think Maestri is ready to go physically,” said Kim. “I think I will have him throw an inning or two in a few days.”

When asked about what would determine whether Maestri survive in the KBO, Kim said, “it is important that he becomes adept in throwing breaking balls.”

The JoongAng Ilbo conducted an interview with Maestri after he joins the Hanwha.

Q. You are on a new team. How do you feel?
A. I am filled with excitement and anticipation now that I am in a new league.

What do you know about Korean baseball?
We did some analysis on Korean players during the WBC. I never had a chance to go up against them personally but I knew they were a good team. I hope to get to know some players better this season.

What first motivated you to play baseball?
Baseball is not widely played in Italy but the sport is popular in some cities. My older brother played first when we were young and that compelled me to try the sport as well. I became the first Italian player in Japan as well as in Korea. I hope to open doors for other Italians to join the Asian leagues.

You played for a while in Japan. What did you learn there?
I try to have the mentality and attitude of learning whenever I start fresh in a different league. In Japan, I learned to control my mind and fitness.

What are your strengths?
I can throw a straight fastball with speeds as high as 150 kilometers per hour (93 miles per hour). I am also adept in sliders, changeups and splinters. But more than anything, I am active and aggressive on the mound.

You came out of the bullpen over the past few seasons. Do you have any problems playing many innings?
Before I became a reliever, I was a starting pitcher in Japan. It is no problem to play several innings.

Strike zones in KBO are a little narrow. The league also continues to see high ERAs and high runs-scored, indicating that hitters are performing better than pitchers. Do you feel any pressure?
Strike zones are something I have no control over. I will have to adjust myself to the new setting. In terms of the batters, I know hitters in KBO are good. I will have to adjust to that as well.