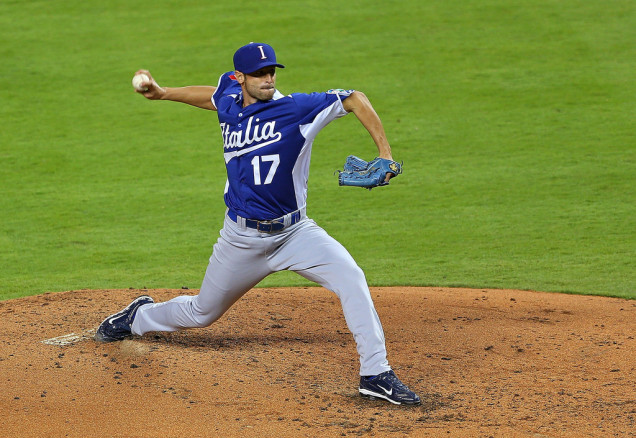 Team Italia manager Marco Mazzieri will have his mixed roster of seasoned MLB players and up-and-coming prospects ready for combat in the World Baseball Classic 2017.

Estadio Charros de Jalisco in Guadalajara will be declared a war zone beginning March 9th when 2017 WBC host Mexico seeks revenge against a “never say die” Italian squad that attacked closer Sergio Romo to pull off a miraculous 6-5 come-from-behind victory in the opening game of the 2013 WBC in Scottsdale, Arizona.

Team Mexico will be managed by Edgar Gonzalez, who will be depending on his brother Adrian Gonzalez to lead the Mexican’s offensive charge with the support of sluggers Khris Davis and Danny Espinosa.

It will be critical for Team Italia to strike first and score runs early because the Mexican bullpen is filled with some of the MLB’s finest relievers including: Roberto Osuna, Sergio Romo, Joakim Soria, Fernando Salas and Carlos Torres.

Team Italia will use a day off to strategize and prepare their troops for the March 11th clash versus Venezuela. Not only will this be one of the Team Italia’s biggest challenges of the 2017 WBC, but it is life-or-death for Venezuelan-born catcher Francisco Cervelli–who played for Team Italia when Venezuela eliminated the Italians from the 2009 WBC competition following their devastating 10-1 defeat.

Fellow Venezuela native Luis Lugo, a 22-year-old Cleveland Indians pitching prospect who secured a Team Italia roster spot in the 2016 European Championship, would absolutely love the opportunity to get the ball and turn the tables on Venezuela.

Puerto Rico, the runner-up of the 2013 WBC, eliminated Team Italia in the second round of play when they rallied late in the eight inning from a 3-1 deficit to eliminate the Azzurri with a 4-3 victory. As with the 2013 WBC, the first round will again be a round-robin format with the top two teams advancing to one of two second-round pools.

However, for the first time in the worldwide tournament’s history, a single-elimination tiebreaker game will be played if necessary to determine the second advancing team in both the first and second rounds. In the case of the first round in Guadalajara, the tiebreaker contest would be played on March 13th.

The two top teams will then move on to the second round of action slated to begin on March 14th at San Diego’s Petco Park.

Team Italia and host Mexico have a favorable advantage over rivals Venezuela and Puerto Rico due to the scheduling of the round-robin tournament. Both teams have a day off following their head-to-head combat match-up on opening night March 9th.

However, when Team Italia returns recharged for a day game against Venezuela on March 11th, the Italians can take advantage of a sleep-deprived and fatigued Venezuela pitching staff that will have been taxed after being used the night before versus Puerto Rico. Team Italia will once again enjoy the same luxury when they play their second consecutive day game against a tired Puerto Rico squad that will have undergone back-to-back night battles versus Venezuela and Mexico.

Although Team Italia remains the underdog, manager Marco Mazzieri’s army of blue-collar baseball players will fight to the death to repeat as they did in the 2013 WBC and advance to the second round.