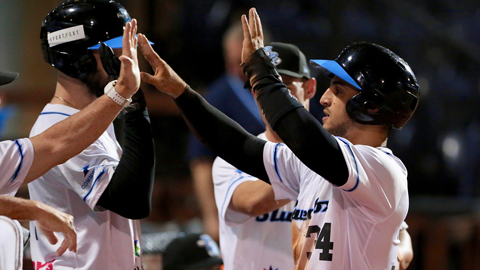 Sydney starter Alex Maestri finished with 13 strikeouts as the Blue Sox stormed to a comfortable 9-0 win over Melbourne in game one of their Brut Australian Baseball League series at Blacktown International Sportspark on Friday night.

The 33-year old was masterful on the mound, giving up just one hit and two walks in six innings and strangling Melbourne (11-6) out of the contest early.

With the bat in hand, it was the in-form Jacob Younis who powered the Blue Sox (11-6) to victory, managing two runs and four RBIs to lift his season average to .388.

After a slow start offensively, Sydney hit the lead in the bottom of the third when they plated two runs.

The first came on a Dwayne Kemp single after Younis singled and stole second.

Soon after Kemp had a run of his own, taking advantage of a wild pitch from Aces’ starter Luke Westphal.

The Sox extended their buffer to five runs in the fourth

It was a tough night on the mound for Westphal, who gave up five runs (four earned) on four hits and six walks in 3 1/3 innings.

Trent D’Antonio scored on a fielding error to give the home side a 5-0 lead after four.

Younis then exploded in the fifth, adding a three-RBI triple which saw Brennan, Dean and D’Antonio score.

He then bagged his second run of the evening off a Kemp sacrifice fly.

Neither side would post any more runs in the following four innings, with the Blue Sox claiming a 9-0 whitewash.

The series continues with a doubleheader from 3.30pm local time tomorrow.